How moving from SolidWorks to Solid Edge improves the design process ?

How moving from SolidWorks to Solid Edge improves the design process while ensuring data compatibility with customers and suppliers? 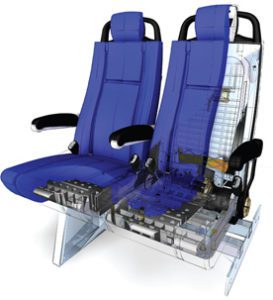 Over time, FSC’s 2D design process, which utilized AutoCAD® software, grew less effective at helping the company meet these challenges. What FSC needed was a 3D design process that would enable virtual prototyping. “We don’t have time to make physical prototypes,” Di Rico notes. “We needed to be able to design in 3D and go into production immediately.”

Another necessity was a product data management (PDM) system, which would make it easier to keep track of all the seat variants. Also, a PDM system’s search capability would foster the re-use of existing designs, a practice that would help in meeting the short lead times. Finally, FSC’s seats have contours and sweeping surfaces, particularly the foam interior components. “We couldn’t even model those in the 2D environment,” Di Rico adds.

The company initially chose SolidWorks® software as its 3D design solution, mainly because more people were using it, according to Di Rico. Users were trained and had started using the new software to a limited extent when a joint venture partner suggested a better option, Solid Edge® software from Siemens PLM Software.

“That company had a product line that we were going to take over, and all the designs were done in Solid Edge,” says Di Rico. “We saw some nice advantages in Solid Edge for sheet metal and weldments design, as well as a more robust assembly design environment.”

Solid Edge comes with the design data management solution, which was also an attractive feature for FSC. Another reason it made sense to switch to Solid Edge was that one of FSC’s main customers, with whom the company exchanges a lot of geometry, uses NX™software from Siemens PLM Software. NX and Solid Edge are both built on the Parasolid®software geometric modeling kernel, eliminating the need for data translation between the two systems.